A Very Falcoholic Discussion: The Running Back Depth Chart

Share All sharing options for: A Very Falcoholic Discussion: The Running Back Depth Chart 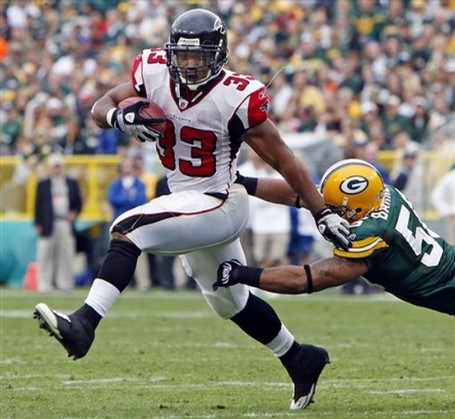 The Falcons know they've got a bruising, yardage-devouring motion machine in Michael Turner. The Burner is the number one guy in Atlanta, period, so this conversation shouldn't include him unless you're adding the words "is awesome" or "runs so hard the universe dents after every step." He's not part of any competition.

The rest of the depth chart is wide open at this point. Jerious Norwood should be our number two, change-of-pace back like he always is, but he's not assured that he'll get any more than 100 carries because the coaching staff likes to use him like a home run hitter. There's no way Turner should hit 400 carries again this year, so someone's going to have to pick up that slack.

That leaves power back Jason Snelling, All-Around Thomas Brown and new signing Verron Haynes to battle it out for one or two spots and table scraps of carries. Our topic of discussion today revolves around who will make the final roster and what their likely role will be with the Falcons.