The Laurent Robinson Trade And Its Aftermath

Share All sharing options for: The Laurent Robinson Trade And Its Aftermath 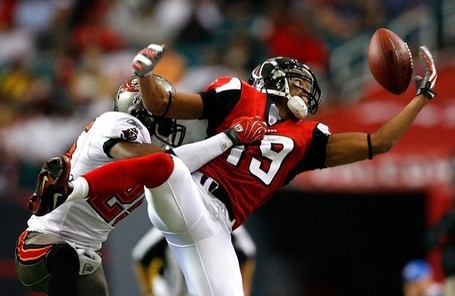 Make no mistake, trading Laurent Robinson isn't going to bring the Atlanta Falcon empire to its knees. By the time the draft rolls around, chances are pretty good most of us will have stopped thinking about him altogether. It becomes easy to do after a guy spends almost an entire season battling concussions and hamstring injuries.

Many have already pointed out that the team's offense was dynamic last year, which means they'll continue to roll right along without L-Rob. I can see the value in that line of thought, but it's not going to stop me from dissenting. I think we as a fanbase have gotten so comfortable with Thomas Dimitroff and Mike Smith that we just defer to their wisdom in all decisions, which is fine. In a single season, they turned a field of cow manure into the Taj Mahal. They've earned the benefit of the doubt, and even though we didn't get any picks outright, we did make a reasonable leap up in the fifth and sixth rounds to the Rams picks.

Despite that, I still don't like this move at all. When we drafted L-Rob in the third round, he flashed speed and pass catching skill in his rookie season. He was a complete non-factor last season, yes, and maybe he's going to turn out to be an injury-prone player. He had a lot of upside, though, and that's something we don't really have outside of Roddy White and Harry Douglas. Michael Jenkins is a quality option, but we know that his ceiling is a decent number two receiver with good blocking skills. Nobody else on the roster right now--and yes, I'm looking right into your soulful eyes, Eric Weems--has the upside Robinson had. Letting him go to move 20 spots up in two of the latest rounds of the draft immediately weakens the depth of our receiving corps in the short-term and long-term.

This all becomes moot very quickly if the Falcons use their 20+ spot leaps to score a major defensive need, an awesome project and tight end or receiver, or use it to draft me into the organization. I'll also probably get a face full of chloroform and a free trip to the bottom of the ocean for daring to question the Comrade, but I can't help it in this case. I don't see why we're giving up someone with so much potential for a very modest gain.