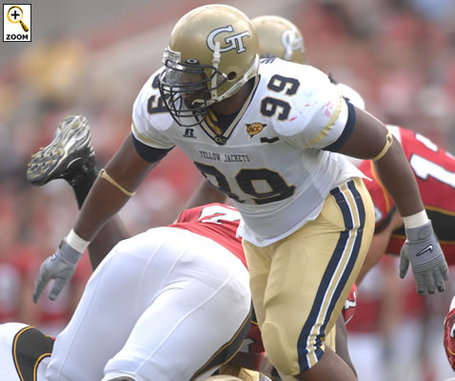 I got the incorrect photo up the first time, so here's Vance Walker looking for a quarterback to destroy.

For those of you who are new to the site, this is something I try to do after the draft. I'll introduce you to one draft pick after the other, starting with some history, moving into pros and cons, and finishing up with their likely roles and some final thoughts. Since I like to work my way from the bottom up, we'll start with our good friend Walker.

Join me after the jump!

History: A senior defensive tackle out of Georgia Tech, Walker was twice an All-ACC selection for his position. A high motor type of guy, he had 22.5 tackles for losses between 2007 and 2008 and notched three sacks his senior year. A management major, Walker couldn't manage to keep his ankle from getting injured last year and missed some action because of that and a concussion. As far as I can tell, there are no major character concerns, though the ankle may be a worry. Walker was a two-year starter at defensive tackle for the Yeller Jackets.

Pros: His tackle for loss numbers demonstrate that he's capable of getting into the backfield and driving. A hard worker, Walker strives to get better and has the room on his frame to add ten pounds, which might help him further against the run. Walker's a savvy player who tracks running backs well and will cause problems for opposing quarterbacks. For a seventh round pick, he's actually fairly polished.

Cons: Not the world's strongest or fastest defensive tackle, Walker has to depend on his smarts and effort to get the job done at times. I'd be a little bit concerned if his ankle injury lingered, because it could screw up what seems to be pretty excellent footwork. It's not likely Walker has enough upside to become an excellent starting tackle in this league, though I firmly believe he could be an asset as part of a rotation.

Role: If Walker makes the team--and I suspect he will--he'll likely spend quite a bit of time off the field. Ideally, he'd spell for Jon Babineaux or Peria Jerry, as his balanced skill set makes him an ideal backup. He's not big enough to provide value as a true NT, but the Falcons don't seem too keen on having one of those unless Trey Lewis is fully recovered. I'd expect him to see enough game action to make a small impact, but he'll have plenty of time to form a strong relationship with the bench.

Final Thoughts: It's hard to know Walker's true value without him taking the field, but if he can make the team as a backup DT as a seventh round pick, I'll be pretty happy. He doesn't have a ton of upside, but his ability against the run and knack for getting into the backfield can only help his cause. A worthy pick, for certain.