An April Discussion Of The NFC South Landscape

Share All sharing options for: An April Discussion Of The NFC South Landscape 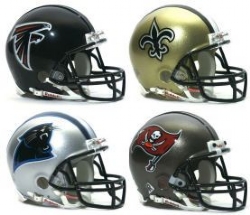 Some would say it's way too early to look at how the NFC South may shake out this season. Some would also say it's too early to start drinking, but my good friend Jack Daniels and I would respectfully disagree. So there.

Rather than do a comprehensive breakdown, though, I'm going to open it up to my far more sober and intelligent readers following a glance at each team.That's right, you guys get to comment for a change. Down with censorship!

Personally, I believe that the Panthers are going to be the weakest team in the division this year. Jake Delhomme hasn't found a magical potion to reverse the aging process or his own decline, Julius Peppers wants out of dodge, and the defense is not the fearsome machine it once was. The team's best hopes for success hinge on their extremely potent rushing attack, but I don't think it'll be enough to save them from a sub-.500 season.

The Saints, on the other hand, should be able to rebound. They've still got one of the best passing attacks in the game with Drew Brees at the helm. They're rolling the dice on low-risk, high-reward defensive players like our old friend Rod Coleman, and they fired notoriously crappy defensive coordinator Gary Gibbs. Games against the Saints have been dogfights in recent years, and I see no reason why that will change in 2009.

Our biggest competition, however, may just end up being the Bucs. Sure, they don't seem to have a quarterback, but the addition of Derrick Ward to an already varied corps of running backs. THe Bucs have an uncanny talent for re-loading their defense, and if they manage to pick up a top-tier wide receiver or a franchise quarterback (Josh Freeman?) before their draft day is over, they'll be gunning hard for the Falcons. Oh, and Jon Gruden was a tool.

Where do the Falcons fit in here? I'm not foolish enough to jinx us by saying anything more than that I think we'll be in the running for the division lead most of the season. Ask me again after the draft and you'll get a clearer answer.