The Falcoholic Mock Draft Spectacular: The Sixth Round Pick

Share All sharing options for: The Falcoholic Mock Draft Spectacular: The Sixth Round Pick 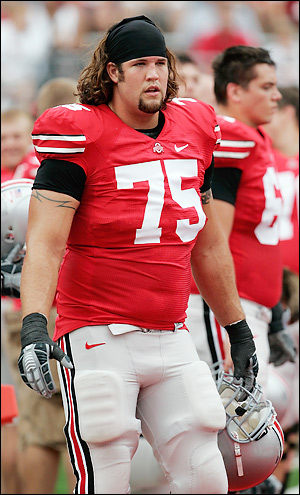 Answering my call to arms, a majority of you picked offensive tackle Alex Boone for the seventh and final selection of our 2009 Mock Draft.

Boone, a hulking fellow out of Ohio State, is undeniably talented. His stock fell rapidly in February, after he got Tased with his blood alcohol level higher than the proof of my entire liquor cabinet. He has admitted drinking problems, too, meaning it's very realistic that he could fall all the way into the sixth round. There are numerous character concerns, but from a talent standpoint, there's few guys left at that point who would have this kind of upside.

I could see the team grooming him to start at right tackle, where I think he'd provide a nice complement to the T. Rex currently occupying left tackle. I leave the concerns about his character to you guys, and I ask you to visit We Will Always Have Tempe for more information on Boone.

And that does it. What do you think of our little draft exercise?