Share All sharing options for: The Falcoholic Mock Draft Spectacular: The Fourth Pick 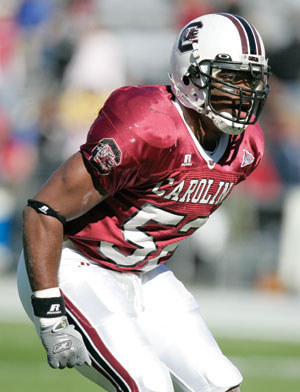 It's difficult to tell whether Brinkley will even be here at this point. He also only nudged out DT Ricky-Jean Francois by a single vote, so he wasn't the overwhelming choice. Still, Brinkley could be a very good player for us.

A lot of it hinges on whether he can move outside, as that's his best chance at a starting job in the next couple of years. If nothing else, he's quality depth, and he's a more than capable tackler, pass rusher and all-around tough guy. The true value of this pick really does hinge on him making that move.

For more information on Brinkley, ask mistab50 or visit Garnet And Black Attack. Might as well get the nominations for Round 5 started, too, as we're only a week away from the actual draft.