Tony Gonzalez And A Question Of Value

Share All sharing options for: Tony Gonzalez And A Question Of Value 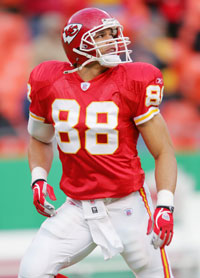 At first glance, you'd think I'd be thrilled by the possibility of having a future Hall of Famer coming to the Falcons. It's not like we've been able to boast about that possibility every season or anything.

As usual, though, my borderline-paranoid nature takes over. Yes, Tony Gonzalez is a damn fine tight end. He's put together one of the best tight end careers of all time in Kansas City, and up until last season he never made any waves in the organization. At age 33, he's probably got two or three years left before he hangs it up, but he has aged extremely well thus far. It's not a question of whether he'd upgrade the tight end position for the Falcons, because he would. Easily.

What I worry about is the rumored gain for the Chiefs. Somehow we're supposed to believe that they can give up a second round pick and get a potential franchise quarterback (Matt Cassel) and a decent veteran linebacker (Mike Vrabel), yet we have to give up our second to get a second round tight end? That's not the kind of move I can see the braintrust making, especially because of the multiple needs on defense. A third or fourth round pick for Gonzalez makes a lot more sense.

That said, you do have to ask yourself if the kind of player we should be going for is a two year fix like Gonzalez. Should we trade a pick that could go toward a potential starting safety or defensive tackle (this is mere conjecture)? Is Thomas Dimitroff expecting great things in the fifth and sixth round? Should I just stop questioning the moves this team makes, lest I look foolish?

I want to open this up for discussion, but I'll be extremely clear first. Trading a second round pick this year for Tony Gonzalez would be a terrible move, in my honest opinion. At this stage of his career, he's not worth a second round pick, and I can think of a look of positions of need that are greater than tight end. Knock it down a round or two and I'll give it a wary thumbs up.

Either way, it's kind of exciting to be in the running.