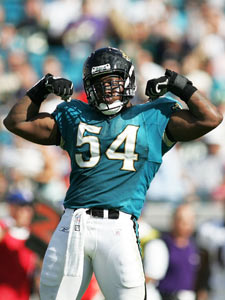 The Falcons didn't waste any time bringing Mike Peterson into the fold, signing the linebacker to a three year deal. Hey, we wanted free agents, right?

The former Jaguar reunites with Mike Smith, who was his defensive coordinator over there for a bit. At age 33, Peterson isn't three quarters of the player he used to be and would probably best be used as a backup at all three spots. More than likely, though, the Falcons will put Peterson and Stephen Nicholas into the two outside spots and let whatever rookie(s) they pick up in the draft learn under him. Less likely is the possibility that he'll be called upon to play inside, forcing talented rookie Curtis Lofton outside. I think I'd be a lot less happy with that possibility.

His familiarity with Smith's defense makes him a good stopgap, I guess, but I'm going to wait and see how he's deployed before I declare this a great signing. Used as a backup or as a short-term starter outside, there isn't much to complain about here. It highlights the Thomas Dimitroff and Smith way of doing things, as Peterson has experience in the scheme, likely came relatively cheap and isn't going to block any young players who catch fire in 2009.

Let's hope he regains the Peterson form of old.