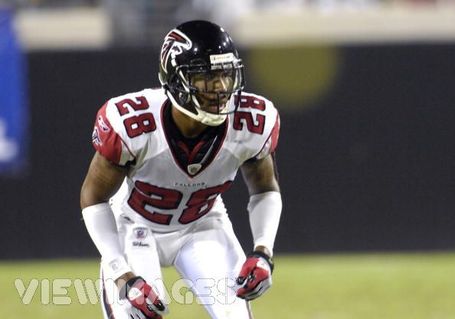 This man will be a starter at one of the two safety spots by the end of 2009. Write it down and mock me heavily if I'm wrong. I'm dead certain it'll happen.

Thomas DeCoud is a talented safety who played solid football in his rookie season. I don't think anyone was blown away by his transition to the NFL, but with a year under his belt, you can count on him being a familiar face on the field in the season ahead. He won't be alone, either. Guys like linebacker Stephen Nicholas and cornerback Chevis Jackson will likely come to play a big role in the Falcon D this year.

There's been a lot of discussion about how heavily Thomas Dimitroff, Mike Smith and the rest of the Falcon brain trust are investing in the draft. With no major free agent signings and only the smallest rumblings of trade rumors, that'll have to be true. Largely lost in that discussion, however, is the contributions that have to be expected of guys already on the roster.

That's where my foolish or bold prediction at the top of this article comes in. The Falcons need a safety desperately, and we all know it. What are they going to do about it? Probably draft someone in the early-to-mid rounds, potentially shuffle things around and throw DeCoud into the fire. He's got the skill to lock down a starting spot, so why not let him try now? It'll be the same thing with outside linebacker. It's the biggest need on the roster, but you can't expect to land two starters in the same draft. Hello, Nicholas! Defensive tackle is an area of need with not a lot of starters on the board by the time the Falcons pick, so you can count on Trey Lewis to get a long look if he's healthy.

Is this the best way to go about improving a defense that really wasn't very good last year? I'll be the first to argue that we don't seem to be taking huge leaps forward here, and we won't really know until the results of the draft are in. I'm still kind of surprised that there was little to no interest shown in guys like safety Sean Jones, but there's a round hole here and I don't think Mike Smith is particularly satisfied with filing down the edges on a square peg just to fit someone in. The guys already on the roster are guys the coaching staff knows well, guys they've seen in practice and guys they may be confident enough in to let veterans like Keith Brooking and Lawyer Milloy walk. There's never been management in Atlanta before that was so unafraid of letting go of icons in their efforts to improve the team.

In the end, I guarantee you that at least two or three of those critical holes on defense will be filled by players already on the roster. Whether they succeed or not will determine the success of that particular strategy, but there's one truth here that bears repeating.

The draft alone won't be enough this year.