Share All sharing options for: The Great Debate About TE L.J. Smith 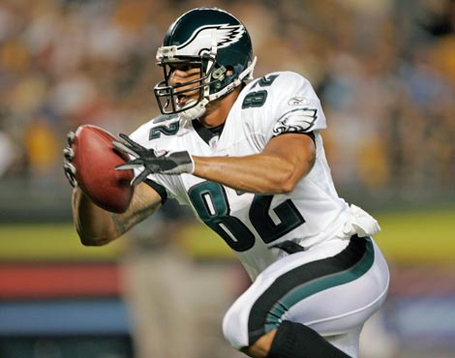 No free agent target for the Falcons has divided this fanbase more than L.J. Smith.

I realize that's not saying much. Thomas Dimitroff has escaped into his underground lair underneath Flowery Branch every time a free agent comes near the place, so it's not like we've had a lot of chances to vent our collective spleen. Still, there's a small percentage of folks who want to see what Smith can do and a very large percentage who think he's doomed to fail. We're a reactionary bunch.

So what exactly is wrong with L.J. Smith, who will be visiting with the team Thursday? I'm starting this post with the opinion that he's worth a gamble at a low price because I don't think that with our myriad defensive needs, our good Comrade needs to be chasing after tight ends in the first day of the draft. I'd really prefer he didn't even bother. So while Smith hasn't exactly lit the world on fire the last six years with the Iggles, he can undeniably catch a few passes.

Let's take a quick gander at his career stats. All done? Okay, what have you noticed? That's right, (insert name here), he's dropped off a cliff a little bit the last two years. During his peak years of 2005 and 2006, Smith hauled in more than 50 passes at an average of about 40 yards a game. I'd call that respectable, but not great. The last two years, he's averaged about 20 yards a game and last year averaged a putrid 8.1 yards per catch. To put that in some perspective, Justin Peelle averaged 10.6, and I don't think any of us saw him doing wonderful things with the football after most of his admittedly scant catches. It wouldn't appear that he's got a whole lot of traction there, even with those admittedly scant stats.

So the signs there aren't great, true. But surely Philadelphia fans will say something nice about a guy who played for them for six years, right? Let's see what Bleeding Green Nation reader foos05 has to say:

Awesome! He can officially be useless somewhere else!

Other comments include how many touchdown passes he's dropped, how he whiffs on blocks and how he spends his off-seasons learning to play the guitar.

Based on the seeming statistical decline, the testimony from Eagles fans and the fact that Smith would almost certainly get on the field often if the Falcons signed him, I'm revising my stance to say only if he comes so cheaply that he makes penny candy look expensive. I remain convinced that the first round in particular is not the place we want to address tight end, but it's still clear the position needs an upgrade over the Ben Hartsock and Peelle tandem.

Is L.J. Smith that upgrade? There doesn't seem to be a whole lot of evidence for that, but I'll let you guys debate it.