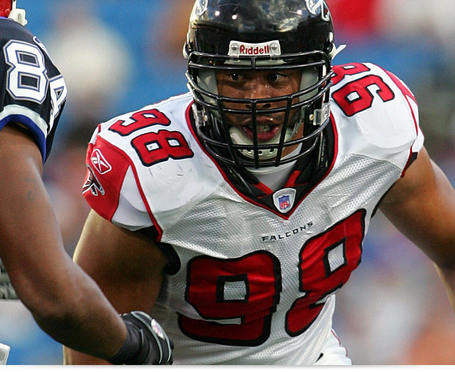 Our second discussion of the week became a necessity once the Falcons signed Chauncey Davis to a sparkling new four year contract. While many of you are probably eager to tackle what Davis could do with a full season under his belt, I think Jamaal Anderson is by far the bigger challenge.

With little in the way of numbers to help his case, Anderson has widely been regarded as a bust thus far. He's been solid against the run, true, but the Falcons have needed him to be the pass rushing machine he was supposed to be. He simply hasn't lived up to his billing.

If you had to look into your crystal ball and forecast Jamaal Anderson's production for next year, would you see a breakout season? Would you see some kind of productivity in limited starts? Or would you see him fulfilling the label already placed upon him and fading into obscurity behind Davis and whoever the Falcons pick up in the draft at defensive end?

This is your destiny. Project away.