Share All sharing options for: Curtis Lofton Has A Bright Falcon Future 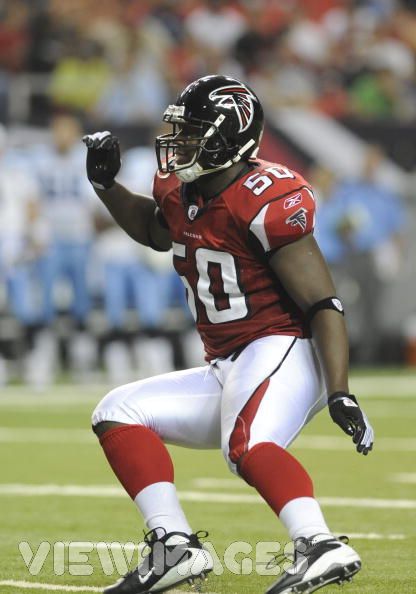 Throughout their woeful history, the Atlanta Falcons have never done consistently well at any one thing. In recent years, however, the Falcons have become a team that seems to cultivate talented linebackers.

For whatever reason, this is a team that has had at least one truly talented linebacker on the roster for the better part of two decades. We had the great Jessie Tuggle until 2000, and we just watched the very good Keith Brooking walk out the door. Even Michael Boley put in a couple of terrific seasons as Brooking was declining. These guys may not be Hall of Famers, but they were defensive anchors and very useful players for a very long time. If you ask me--which your doctor will not recommend--we have a heir to the linebacking throne on the roster.

Curtis Lofton is a hard-nosed, intelligent defender who made enormous strides in his rookie season at middle linebacker. Mike Smith noticed that and seems confident that Lofton will be a three-down player in his second year in the league. With time, he could become a leader on what is reallly a very young defense, and he seems to be close to every play within a ten-mile radius of his position.

With Smith's confidence in him and his own talent, I can see Lofton becoming one of the best players on the team within a season or two. He's got the potential to be an absolute force out there, and the Falcons have shown they are willing to reward talent, especially at linebacker. I'm calling for Lofton's first 100 tackle season in 2009, and he 's not going to look back.

Your thoughts on Lofton?