Falcons Could Make A Splash With Little-Known Prospects

Share All sharing options for: Falcons Could Make A Splash With Little-Known Prospects 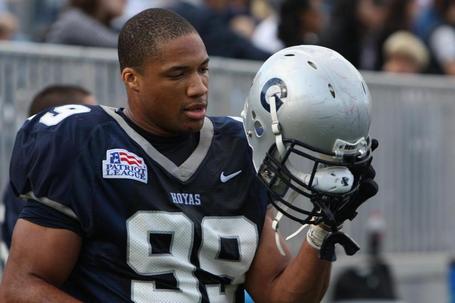 Besides having one of the coolest names I've ever seen, Etukeren is also drawing interest from the Falcons. The Georgetown defensive end prospect will be in for a private workout soon, and he could represent a mid-to-late round draft pick for a franchise that still needs help along the defensive line. More than that, even, Etukeren serves as a symbol.

This is no longer a Falcons team that's going to make a draft choice based on a big name or where a guy went to college. Thomas Dimitroff strikes me as the kind of guy who passes right by the new releases and digs up The Two-Headed Bimbo from Mars when he heads to the video store. Nothing warms my heart like a general manager who isn't afraid to tunnel to get the best value, as it might free up a really high ceiling player in the first couple rounds for a greater position of need.

It's especially important this year to make our later round draft picks count, because the Falcons could easily use every single selection on defense and just barely fill all their holes. If they can stay healthy, the returns of Robert James and Trey Lewis could go a long way toward that, but the team knows they can't afford to take something like that for granted. I honestly wouldn't be surprised if our seventh round draft pick made the team this year, or at least hung around on the practice squad.

While Etukeren isn't an upper echelon prospect, he's a guy who seems to have some pass rush skill and could over time become a valuable part of a defensive end rotation. If you've got other guys you think could be great bargain picks, discuss 'em here. You'll need them when our mock draft gets around to round five or so!