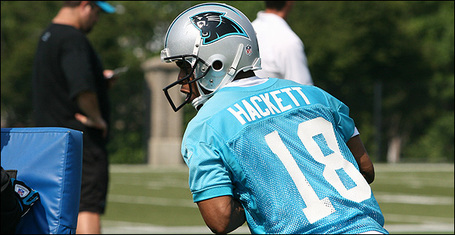 You're reading the title of this post and shaking your head, aren't you? You must think ol' Dave the Falconer is crazy as Terrell Owens in outer space, huh?

Well, you're absolutely right, but hear me out regardless.

D.J. Hackett is a guy who barely managed to get on the field last year for the Panthers. He was hurt for a good chunk of the year--just like the season before--and when he was there the team basically ignored him. He's drawn virtually no interest in the free agent market this off-season, too. And that's exactly why we should go get him.

Hackett will cost us virtually nothing. He's a big target with good hands who is an effective receiver when he's on the field. We can't count on Brian Finneran forever and Laurent Robinson--as much as I hate to admit it--may turn out to be a bust. While I'm pretty comfortable with Roddy White, Mike Jenkins and Harry Douglas as our top three, it never hurts to add a guy with some upside when you can get him for virtually nothing.

Worst case scenario is that he's hurt again and simply does nothing, at which point we can cut ties with him a year later. Best case if that he actually provides some value at receiver, which despite last season's extreme awesomeness we could still use.