The Atlanta Falcons Will Draft A Tight End, But In What Round?

Share All sharing options for: The Atlanta Falcons Will Draft A Tight End, But In What Round? 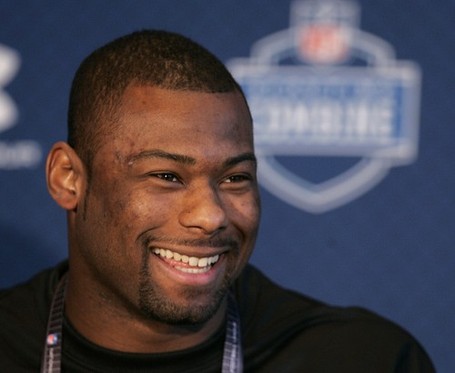 Since we know any upgrades or additions at the tight end position are coming through the draft, it seemed like an appropriate time to gauge when you guys think we should make that pick.

The dude above is Brandon Pettigrew, who the guys over at SBN's Mocking the Draft have penciled in as the Falcons' selection in the first round. I'm of the opinion that our first pick needs to come on the defensive side of the ball, so despite Pettigrew's pedigree as probably the best at his position in 2009, I can't see the Falcons grabbing him at 24.

So logically, we ought to be looking a little further down in the draft. I'd argue that on the short list provided at the official site, Jared Cook and Shawn Nelson are the next tier of tight ends. Cook is a hell of a receiver whose blocking skills might be up for questioning, and Nelson is a little less well-rounded than he is. If we're looking for a guy who can both block and catch right out of the gate, our options appear to be virtually nonexistant. David Johnson of Arkansas State, who isn't likely to go before the last three rounds of the draft, might actually be the most well-rounded guy out there.

The question then becomes whether we're looking for a guy who the team can mold over the next couple of seasons as Ben Hartsock and Justin Peelle form a two-headed beast, or if the team should bite the bullet and get the most talented pass-catching tight end they possibly can. I'm of the opinion that picking up a guy with upside a little later in the draft is the intelligent thing to do, as there's still many glaring needs on defense and we could still use a quality right tackle. I guess I'd select either Johnson or Dan Gronkowski out of Maryland, who is a very competent blocker, in the fifth round or so and see what can be done with them, unless Dimitroff moves back and picks up multiple second-or-third rounders.