Share All sharing options for: The 2009 Falcoholic Mock Draft Spectacular: The First Pick 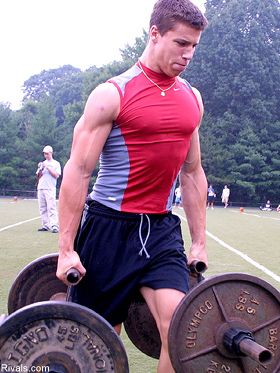 Ladies and gentlemen, the first pick of your 2009 Falcoholic Mock Draft is LB Brian Cushing out of USC.

Out of a field of worthy candidates to be the first round pick, you guys overwhelmingly voted for Cushing. Many of you seem skeptical that he'll make it all the way to 24, and I have to admit it's unlikely. If he does, though, this would be a fantastic choice for the good Comrade Dimitroff.

A tough guy who tackles well, can play the pass and run capably and likely play any linebacking spot the team needs him to, Cushing could make an immediate impact and would likely be starting by the end of his rookie season. A lot of teams will be looking at him because he seems like a fit at any linebacker spot you need to wedge him into, and I have no doubt that he'll be a successful player in the NFL. If there's a quibble with Cushing, it's that some scouts say he won't be picking off any passes (the dreaded cement hands) and that he might not be durable enough to withstand the pounding he's headed for in the NFL. I don't think that's enough to discourage a team from taking a hard look at him in the first or second round, and he's been climbing charts like crazy the last couple of weeks.

So we have our first pick, and we've slotted in a linebacker opposite of Mike Peterson. Where do the Falcons go next? Only you, aggressive reader, can nominate our next selection. Go go go!