Share All sharing options for: Opponent Series History Week 9: ATL vs WAS

Gang, I'll be honest. It ain't pretty. To demonstrate how utterly ugly our series history is against the Redskins, here's a chart: 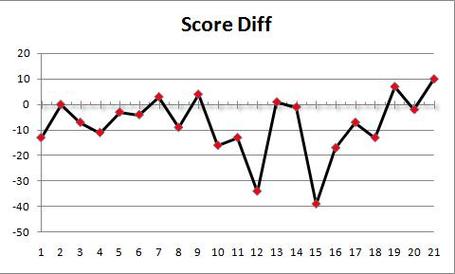 The X axis is the game number, the Y axis is the score differential. A negative score differential (see below 0 on X axis) indicates a loss. Yeah, it's that bad. Out of twenty-one games, we've won only five. The 'Skins have won fifteen. In '67 (game 2 on the chart), we somehow managed to tie with them, so at least that game's not hanging out in our L column...