Share All sharing options for: Remaining Opponent Records: A Trip into Easy Town?

The schedule continues to get easier and easier. Here's the graph: 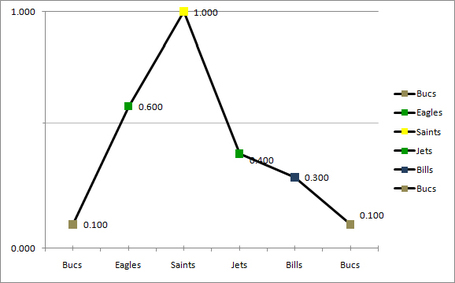 The two winning season teams are definitely skewing things a bit. Take them out of the picture, and you get a number that is sweet upon the ears: 9-31 combined record of Bucs, Jets, Bills, Bucs. We can win against a 9-31 slate of games. The real question is, can we win against the 16-4 side of the remaining schedule? I think we'll win at least one of them. 10-6 would be an awesome ending mark, dontcha think? I still say 9-7, but I'm not giving up hope just yet.

The predicted records are the same as they were last week, no real change. We'll still have some easy, easy games. I'm still saying the Saints lose against NE this Monday. I still think the Bills suck.

With all of this remaining opponent talk, I'd like you to follow the jump for a look at my perspective on the Falcons' playoff potential.

The Falcons have been getting a bit of buzz with their remaining slate of games, seeing as only two of our last six opponents currently have winning records. Don Banks pegs the Falcons as the most dangerous .500 team in the NFC. Knox Bardeen of Fanhouse agrees. Why all this optimisim? The schedule, as you can see above, is easy peasy (or at least, should be).

The Falcons are currently in 8th place in the NFC, two spots shy of that illustrious Wild Card playoff berth, with the Eagles and Giants standing above them. The Eagles have the following slate remaining. I'll include my predictions for the rest of their season:

I realize the Broncos are in a skid but I'm holding out for an upset. The Philly Cheesesteaks currently stand at 6-4, and with my prediction, end the year 8-8. With their inconsistent play, I truly do not know what to expect, but this is what I'm feeling and hoping for.

The Giants' schedule is a bit harder to pick. I'll try my best:

The Giants will end the year 9-7. They stand at 6-4 and have a short week, facing the Broncos tomorrow night on NFL Network. I feel they won't be nearly as rested and ready as they need to be to survive a mile high showdown. The issue is then tiebreakers. With a 9-7 Falcons and a 9-7 Giants thirsting for a playoff spot, who wins? Well, in a two-club record tie situation, the rules are thus:

So who wins in this case? The Giants, of course, seeing as the first tiebreaker is the head-to-head comparison. Head-to-head, the Giants beat the Falcons 34-31. Case closed.

Of course, all this goes out of the window if the Falcons win five (or, Vishnu willing, six) more games and both the Eagles and Giants flunk out of the rest of their seasons. In that case, the Falcons would likely be a lock.

Still, I stand by what I said in a comment on a previous post: this team is not a playoff caliber team as long as they cannot win on the road. They're 1-5 now when visiting other teams and that does not a playoff team make. If we go to the playoffs, great. If not, that's ok. I just want that 9-7 at the end of the year. I'll be immensely proud of our team whether they make it to the postseason or not. Just please, let's get those back-to-back winning seasons.