Share All sharing options for: Remaining Schedule: It's Gotten "Easier"

Take the "easier" in the title very lightly. A lot of our remaining opponents lost last weekend (save those on a BYE) but don't be fooled. Each and every last game of this season will be a fight. The injuries are mounting and the competition, though looking less scarier by the week, will want a win against us. The time for complacency has passed. The Falcons either fight until not a man is left standing or they can go ahead and look to next year.

No real changes to the trend of the graph, but the records are getting worse. As far as I can tell, none of our remaining opponents (that were not on a bye) won last weekend save those dastardly Saints. 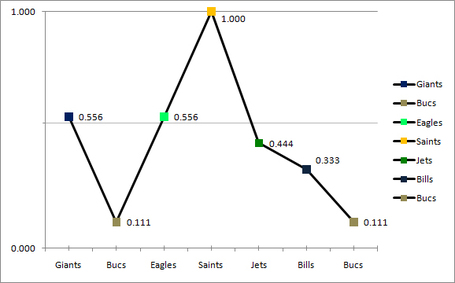 The real change is in my projected week-of-game opponents' records. Check this out. 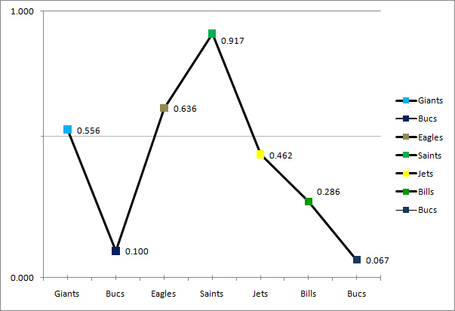 Notice how the number of projected winning record opponents has dropped from four to three. After the Jets managed to lose to the Jaguars, I had to change my line of thinking on them. We still get a 1 loss Saints team (thanks to the New England Patriots) and we're still having to face a Philly team that will come into the Dome after winning against the Bears and Redskins.

After we face the Giants, we get three straight Dome games. I'm holding out for the crowd to be a key factor in our wins against the Bucs and Eagles. That Saints matchup, though, I dunno. I swear I think we should wear something different for them. The throwback, the all-black alt, maybe just the red helmets. Something to signify the importance of it...