Where Will You Be When The Super Bowl Comes?

Share All sharing options for: Where Will You Be When The Super Bowl Comes? 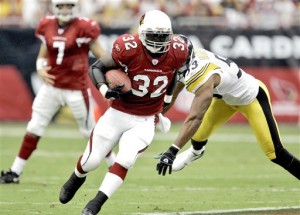 I have watched all but one of the Super Bowls of my lifetime.

Typically, we'd cook up some wings, flop onto the couch and not move for the duration of the game.There was nothing particularly awe-inspiring about these gatherings, and while we screamed and whooped like anybody else, it always was fun to gather with family and a few family members.

As a lonely Falcons fan, it was always preferable to watch the game in that quieter frame. I didn't have to deal with the bulk of my overwhelmingly Patriot-centric friends when they were doing well, and I didn't have to listen to everyone bitch and moan about a bunch of NFC players they'd clearly never heard of. Sometimes tradition's a fine way to spend a national holiday, and it's hard to argue that the Super Bowl hasn't been elevated to that level by now.

Sadly, that tradition ended last year. My editors assigned me to go to sports bars and cover fan reaction to the Super Bowl, which basically involved interviewing a bunch of Patriots fans and the occasional loud and drunken Giants fan who got death threats from said Patriots fans. It was kind of a surreal experience for me, but it's one I'll have to repeat this year. If I'm lucky, I'll catch snatches of the game in between visits to sports bars and whatever breaking news a vengeful Vishnu tosses my way.

I can't complain, really, as it means I still have a job. Still, I'll miss sitting down with a plate of wings, making fun of Ben Roethlisberger and laughing at the ads. So it goes.

For this one, I'm going to have to live vicariously through you guys. What are your Super Bowl traditions, and are they humble or grandiose? Who will you be pulling for when the Steelers and Cardinals collide?