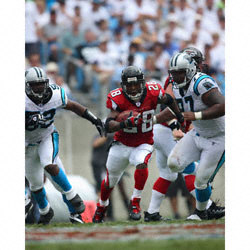 After their second ridiculously easy game of the season, the Falcons face notorious nemesis Carolina in an actual game of football. This will be a good indicator of whether or not the Falcons can hang with decent teams, as the Panthers look to be the very definition of decent this season.

To win this game, the Falcons will have to control the clock and get Michael Turner and Jerious Norwood a ton of carries. If they can wear out the defense, Matt Ryan should have little trouble sticking to 15-20 passes and not overexposing his rookie-level decision making. If this game gets out of hand, though, the Falcons could fall behind big.

Join me after the jump for this storied rivalry game (or something).

Weather? The forecast calls for Thunderstorms. Fortunately, Michael Turner cannot be harmed by the elements.

Fun Fact? Albeit against bad teams, the Falcons are averaging nearly 100 yards more on offense than the Panthers. A good defensive effort would go a long way this week.

Injuries? Laurent Robinson is likely out, and Sam Baker could miss the game as well. There's a small chance bust struggling defensive end Jamaal Anderson could miss the game, too. The Panthers are likely to be without backup QB Matt Moore and fourth or fifth string WR Ryne Robinson.

Foe? My good friend Jaxon at Cat Scratch Reader will be on the ones and twos for the game, so be sure to stop by there and see what's going on in Panther Nation.