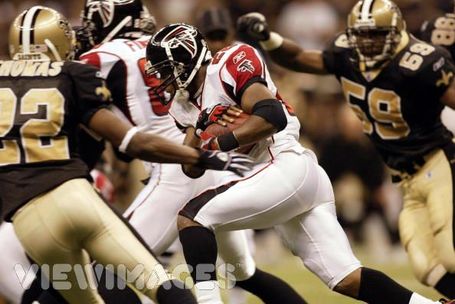 This is a game worth getting way too excited about. The Falcons will look for their first NFC South win against the Saints, who were supposed to roll to the division title but have struggled thus far. I love me a division rivalry, and a win here would put the Falcons at 6-3 and within striking distance of the wild card at least.

Join me after the jump and we'll get this party started.

Weather? Sunny, but it won't matter to those trapped under the great dome.

Fun Thought? You'll rarely see a fan base more confident in an upcoming beatdown than Saints fans, who are predicting everything from a close win to a blowout against the Falcons. They've got plenty of reasons to be confident given their offensive strengths, but somehow I don't see this being quite the slam dunk it's being made out to be by our esteemed counterparts.

Injuries? We'll be missing OT Sam Baker, and C Todd McClure and T Todd Weiner are questionable. Uh oh. The Falcons could also be without CB Brent Grimes and DT Grady Jackson, who are both questionable too. The Saints will be missing C Jonathan Goodwin and some guy named Reggie Bush. TE Jeremy Shockey and G Jahri Evans are both probable.

Foe? My good friend saintsational at Canal Street Chronicles, who runs one of the network's most informative blogs. Be sure to visit there for some good-natured trash talk, but don't cause too much ruckus or I'll be footing the bill.