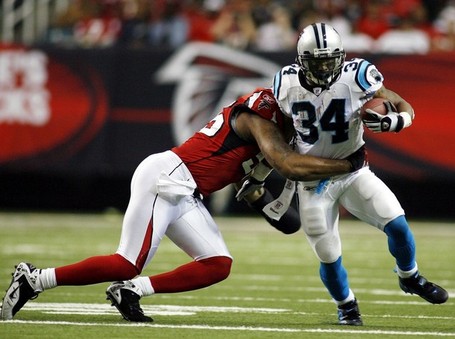 Welcome to the latest chapter in a recent yet burgeoning rivalry, pitting our beloved Atlanta Falcons against the hated disliked somewhat less-than-loved Carolina Panthers. This is a big game in the division, with the Falcons propping up their playoff hopes with a win and the Panthers setting themselves up for the division crown if they pull it off.

Let's cheer on the Georgia Dome's finest after the jump!

Weather? Awesome with a chance of even better.

Fun Fact? The Falcons and Panthers have traded some big victories over the years. As tlozwarlock noted, the Falcons crushed the Panthers 30-0 and 41-0 in 2002. On the other side other coin, the Panthers beat the Falcons 44-11 in 2006 and 24-9 earlier this year.

Injuries? There's an incredibly long list of questionables here, so I'll hit the lowlights. OT Sam Baker is out, WR Laurent Robinson is out, Jason Elam is questionable (but very likely to play), DT Grady Jackson, RB Jerious Norwood, WR Roddy White and TE Ben Hartsock are all questionable. Thanks for being the bearer of bad news, Official Site!

The Panthers have four probables. They're looking very healthy against the Falcons, which isn't great news.

Foe? You all know and possibly love Jaxon, who capably caps out Carolina coverage over at Cat Scratch Reader. Be sure to check out what he and his readers are saying during the game.

GO FALCONS! Let's make sure these cats don't land on their feet!