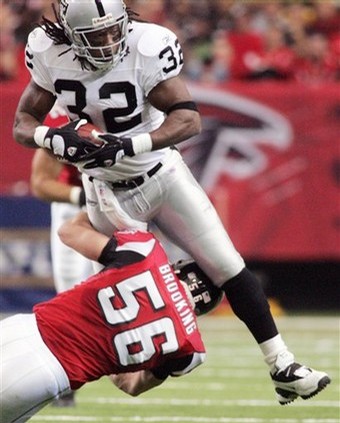 Unshaven, unwashed and generally disheveled, I return in time for the game against mighty tenacious Oakland. Sitting at 4-3, the Falcons could use a win to boost themselves over last year's total with only half their slate of games completed. I'm excited to see what the team can do, particularly if Michael Turner gets back on track.

Join me after the jump as we get some excitement going for our resurgent Falcons.

Weather? Where the skies stay cloudy all day....

Fun Fact? The Falcons will face former CB DeAngelo Hall and should have faced former FB Justin Griffith, but the latter is down with a season-ending injury. The Falcons' performance against Hall will likely swing the outcome of this game, given that Roddy White is as likely as he'll ever be to end up locked down this weekend.

Foe? saint of Silver and Black Pride, who has graciously put up a FanPost for those of you who have questions about the Raiders. Be sure to give his site a visit.