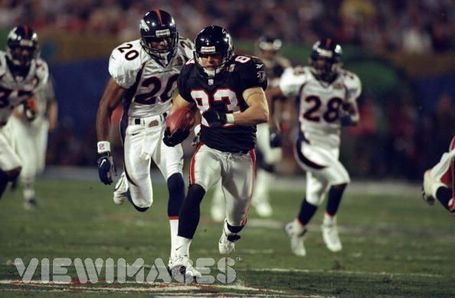 This is the game where the Falcons finally get a chance to prove themselves against a blah blah blah. At this point, the team has nothing left to prove to any of us, but it sure would be nice to watch them put a whupping on the team on the other end of our first and only Super Bowl loss.

Let's just enjoy another day of football, and hopefully one that's just as good as the season has been in general. Join me after the jump.

Weather? If you've got any weather at all, there's a hole in the roof.

Fun Fact?The Broncos have not yet faced an opponent with a better record than their own this year. That's a little bit sad.

The Bronc-a-donks will be missing LBs D.J. Williams and Nate Webster, alongside S Marlon McCree. RB Selvin Young is doubtful, while CB Champ Bailey (my most feared defensive Bronco) is questionable to play. TE Tony Scheffler is probable and expected to play.

Foe? Mile High Report is one of the best blogs out there period, nevermind just about the Broncos. There'll be a huge contingent of Broncos fans going over there tomorrow, so be sure to stop by and give them hell of some nature.