Share All sharing options for: The Great Roster Breakdown: Punter 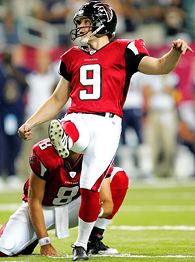 Per Hamburger's pre-holiday suggestion, I'm going to break down and grade every position on the roster. That's right, folks: I'm showing some Grade A ambition on this one.

I'm going to start with the least important/least needed positions first and work my way up the ladder. As you can imagine, that brings us to punter and ill-fated kicker experiment Michael Koenen, who has served the team capably enough over the last few years. When he's asked to simply punt and handle kickoffs with his booming leg, he represents a fine choice. But how fine?

Breakdown: Koenen was widely touted when he was picked up by the Falcons out of Western Washington three years ago. Maybe it was because he was replacing a long line of namby-pamby Falcon punters, but for once I thought it was actually relevant to marvel over the leg strength of football's least glamorous position. For the freshman campaign, Koenen mostly lived up to the low level buzz, averaging a very respectable 42.3 yards per punt. The main knocks against him were a sub 30% rate of banking it inside the 20 yard line and an 11.5% rate of nailing touchbacks, the punter's natural enemy. Still, a fine rookie campaign.

The second year saw him take kicking duties and whiff on an ugly 66% of field goals. Thank God for Morten Andersen. Unsurprisingly, his yards per punt were down slightly and his net yardage took a nosedive. Early in the season, I speculated that he was losing his confidence and the numbers clearly bore me out. By the end of the season, he was steadily improving and foreshadowing 2007. As hoped, he improved across the board in 2007 in every relevant (if there is such a thing for punters) statistic, pumping up his net yardage, yards per punt and dropping his touchback percentage. He also missed two long field goals, proving that this team could actually use a regular kicker with a strong leg.

Going forward, there's no reason to believe Koenen can't meet or exceed those numbers next season. He's still only 25 years old, hasn't taken the Sauerbrun steroid/hamburger route yet and should be weaned off the long field goals if Dimitroff snaps up a kicker who was born before the Byzantine Empire was thriving. In short, he's the kind of mostly reliable guy who makes you not even think about the punter--exactly what I want from the position. He could still improve, so let's factor that in to the grade.